Parental concerns over McDonald’s marketing Big Macs to kids who sign up for basketball have been rejected.

Parents’ Voice lodged a complaint to Ad Standards when a 13 year old received an email after signing up to play basketball.  The email promoted the McDonald’s app and offered a free Big Mac.

Ad standards considered the complaint against the new AANA Food and Beverages Code.  The Code says if a food is unhealthy, the ad must not target children or provide giveaway products.

The rejection of this complaint shows the new Code is no better at protecting children from unhealthy food marketing than previous Codes.  Ads can squeeze their way through loopholes that narrowly define targeting children.  Ad Standards said the product wasn’t appealing to children as it was “a plain burger with no toy”.  They also said that “Bounce into Macca’s for your Free Big Mac” was language that would not appeal to children.  The determination seems to ignore that this is about a 13 year old who isn’t interested in toys but certainly would like burgers.  Surely “bounce into Maccas” appeals to a young teen basketballer?

Ad Standards concluded that “the advertiser had done everything in its power to comply”.  Is that what the new Code offers? A cloak for unhealthy food advertisers to say they tried.  And sometimes they might fail.  That’s not good enough.  We are led to believe that the Code is adequate.  Meanwhile children are being “inadvertently” exposed to and influenced by unhealthy food ads.

Ad Standards also said that this wasn’t “a reward for or as a result of signing up to Basketball Victoria”.  They said it was general marketing promotion – which is something that they consider ok — rather than an award or prize.  Again it seems like a giveaway to us.

Help us close those loopholes and let us know if you see unhealthy marketing to children.  Dob in an advertiser here. 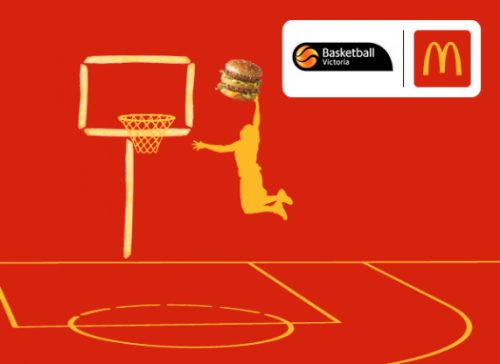 Protecting children from the harmful impact of food marketing